Alexander Ageev, Doctor of Economics, Professor, Director of the Institute for Economic Strategies

Scarcely one hundred years ago the Wright brothers displayed a man-made and manoperated “bird”. Soon plants that made bicycles started to change the speciality to airplanes. Pilots were treated up to the middle of the ХХth century as genuine celestial beings, till they were replaced by cosmonauts and astronauts. A number of sizes and shapes of flying machines achieved the proper population variety. During last half a century an aircraft grew familiar as an individual vehicle, and an access to it opened also for a private user. Thus, aviation went the way  “per aspera ad astra” over the shortest possible historical period.

What one might be expected from  the current age in terms of aviation in general and its customized segment in particular?

Humanity beyond all doubt will go on master “the fifth ocean” through developing the existing speciality and dimensions: passenger transport and freight aviation transport, all categories of general aviation. The issue of control of traffic that is quite dense in the USA and Western Europe will remind the situation that we have with automobile roads. Great culture of pilots and complexity of equipment compared to automobiles enables to maintain by now a high degree of safety of flights, but expansion in the number of aircrafts, in transportation route density and customization will make the topic of traffic and accident rate quite fashionable in 30 years’ time.

Secondly, much in modern practice of control of access to general aviation market – of equipment suppliers as well as consumers – is rather conservative. But here pressure towards liberalization of rules is also inevitable. It will exclude those market players who try nowadays to monopolize it employing administrative levers and fixing current constraints that are profitable to them but not to customers.

And thirdly, business aviation as well as car market and road transport market will become a popular preoccupation as business style and even lifestyle that makes free and encourages success. Let’s take for instance not a very old call “Let’s conquer impassable roads with motor rally”. Impassable roads largely preserve, now they will be assaulted with “aviation rallies”. General tendency to autonomation in energetics, housebuilding, means of communication will increase potential for development of business and general aviation.

In Russia there exist special reasons and opportunities for rapid development of this air transport sector.

These are first and foremost uniquely great spaces, low density and focality of settlement and business centers and very often the fact that many geographic locations are underdeveloped for big aviation and fundamentally unprofitable (without government allowance). And a number of passenger airports is now 4.5 times as little as 20 years ago. We can’t expect that we’ll manage to reproduce dense network of air travel quickly. However development of hard-to-reach deposits, tracking of pipelines, expansion in the number of infrastructure objects – require rapid transport service. Speedy settlement of the North, Siberia and Far East is critical from many points of view: field development, territorial integrity maintenance and national security protection. It’s necessary to build new cities with welldeveloped life support infrastructure, establish new industries, create transport infrastructure, introduce exemption practice, including transport exemption for dwellers of the cities situated in harsh climatic conditions. In the package of advantages access to aviation should make a new element. Moreover, we witness the processes of economic integration of Russia with the former Soviet Union. It gives an additional important impetus for development of business traffic streams. There is also a social-economic prerequisite for business aviation development. It reflects one of the most serious contradictions of the existing social structure – dramatic stratification of society. We actually have now several “Russias” according to the level of prosperity with different styles of business and consumer behaviour, including transport preferences.

Demand for business jets is generated by the most prosperous social class. Only 2% of all families in the country possesses half of all savings, rich and very rich people make 5% of total population (with income above 5 thousand euros per capita a month), and the well-to-do make 10% (with income from 1 to 5 thousand euros). This situation is extremely negative in terms of social justice, but it also has a promotional effect for development of certain segments of economy. One of the first “beneficiaries” of this fact is business aviation. Relief of sharp social contradictions will enable to increase a stratum of our compatriots who use this quite exotic so far mode of transport. 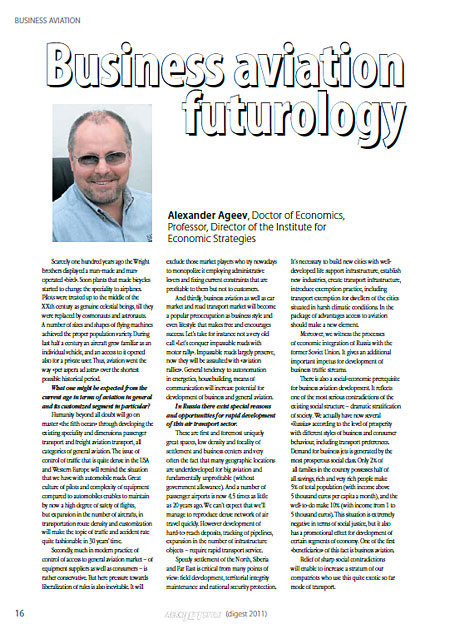 Doctor of Economics, professor. Author of more than 600 scientific, journalistic and literary works, including 28 monographs in Russian, English, German, Chinese and other languages.

Unity of Diversity
The Castle with Ghosts
freemoviexxx